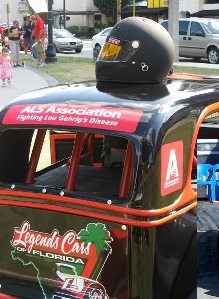 Racing for a cure for ALS

We as a racing family are very involved with the ALS Association Florida Chapter and are always looking for new and different ways of raising money in order to lead the fight to cure and treat ALS (Amyotorphic Lateral Sclerosis) also known as Lou Gehrig's Disease.  The ALS Assocations is a national organization, with 43 chapter across the United States. The Florida Chapter was formed to serve the needs of those living with ALS and their caregivers in the Sunshine State.  We are proud to support the ALS Association through our racing family.

Our goal is to promote the ALS Assocation through our local race tracks and would not only bring in more spectators to the track for a great night of racing but also raise much needed funds for the Florida Chapter of the ALS Association.  The Walk to Defeat ALS is an annual event held every spring at Lake Eola in downtown Orlando.

Some of the fundraising ideas include:

Just what is ALS? Amyotrophic lateral sclerosis (ALS) is a motor neuron disease, first described in 1869 by the noted French neurologist Jean-Martin Charcot. Although the cause of ALS is not completely understood, the last decade has brought a wealth of new scientific understanding about the disease. These advances provide hope for the future.

Lou Gehrig first brought national and international attention to the disease in 1939 when he abruptly retired from baseball after being diagnosed with ALS. Most commonly, the disease strikes people between the ages of 40 and 70, and as many as 30,000 Americans have the disease at any given time. ALS has cut short the lives of other such notable and courageous individuals as Hall of Fame pitcher Jim “Catfish” Hunter, Senator Jacob Javits, actors Michael ZaslowandDavid Niven, creator of Sesame Street Jon Stone, boxing champion Ezzard Charles and pro football player Glenn Montgomery, golferJeff Julian, pro golf caddie Bruce Edwards, musician Lead Belly (Huddie Ledbetter)and photographer Eddie Adams and professional basketball player George Yardley.

ALS is a neurodegenerative disease that usually attacks both upper and lower motor neurons and causes degeneration throughout the brain and spinal cord. A common first symptom is a painless weakness in a hand, foot, arm or leg, which occurs in more than half of all cases. Other early symptoms include speech, swallowing or walking difficulty.

The biological mechanisms that cause ALS are only partially understood. The only known cause of ALS is a mutation of a specific gene: the SOD1 gene. This mutation is believed to make a defective protein that is toxic to motor nerve cells. The SOD1 mutation, however, accounts for only 1 or 2 percent of ALS cases, or 20 percent of the familial (inherited) cases.

Familial ALS represents between five to 10 percent of all cases. The rest arise spontaneously and mysteriously, making seemingly random attacks on previously healthy adults. ALS can strike anyone, anytime.
Physicians have limited choices for treating ALS, and the options that do exist have come into use within the last 10 years. Studies suggest that patients’ length of survival and quality of life are enhanced by night-time breathing assistance early in the course of the disease and by aggressive application of alternate feeding options to assure good nutrition once swallowing becomes difficult. At this time, RiluzoleÒ is the only drug that has been approved by the FDA for treatment of ALS. In clinical trials, Riluzole has shown a slight benefit in modestly increasing survival time.

Stem cell and gene therapy are promising areas of research. In a variety of studies, ALS mouse models are being used to develop treatments that may someday lead to similar human clinical trials. Gene therapy is one field of research where The ALS Association is concentrating support for more study.
More significant advances of research into ALS have occurred in the last decade than all of the time since Charcot identified the disease. Advances in technology and the genetic revolution are aiding researchers in unlocking the ALS mystery. As more scientists focus on this perplexing disease, the outlook for new understanding brightens each day.